Firefly has WON the prestigious Industrial Product of the Year at the Electrical Industry Awards 2017, following a raft of recent exhibition and seminar successes demonstrating our unique spring-loaded fire clip range.

The Electrical Industry Awards, organised by Electrical Times magazine, reward excellence in the electrical sector. 2017 marks the 25th anniversary of the awards, and winners were announced in a London ceremony in late October.

Managing director Malcolm Broomfield commented: “We’re thrilled to be recognised by the 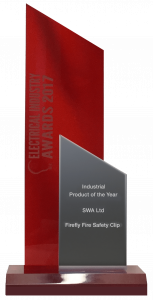 awards, particularly as this nomination celebrates FIREFLY FIRE CLIPS, which are making a significant contribution to reducing the risk of entrapment in fires particularly in the wake of recent tragedies in tower blocks globally. Lessons need to be learned and Firefly is paving the way.

They are one of our most popular fixing products, and have been fine-tuned to make them one of the most efficient, cutting-edge innovations on the electrical installation market. It’s fantastic to see them increasingly recognised by some of the industry’s most prestigious organisations.”

Firefly performance fire clips are widely available through over 2500 wholesale outlets in the UK, thanks to our distribution partners SWA Ltd. See here for fast emailing to region of your choice with our interactive UK Sales Map.